Why workers are protesting at the iPhone factory in China 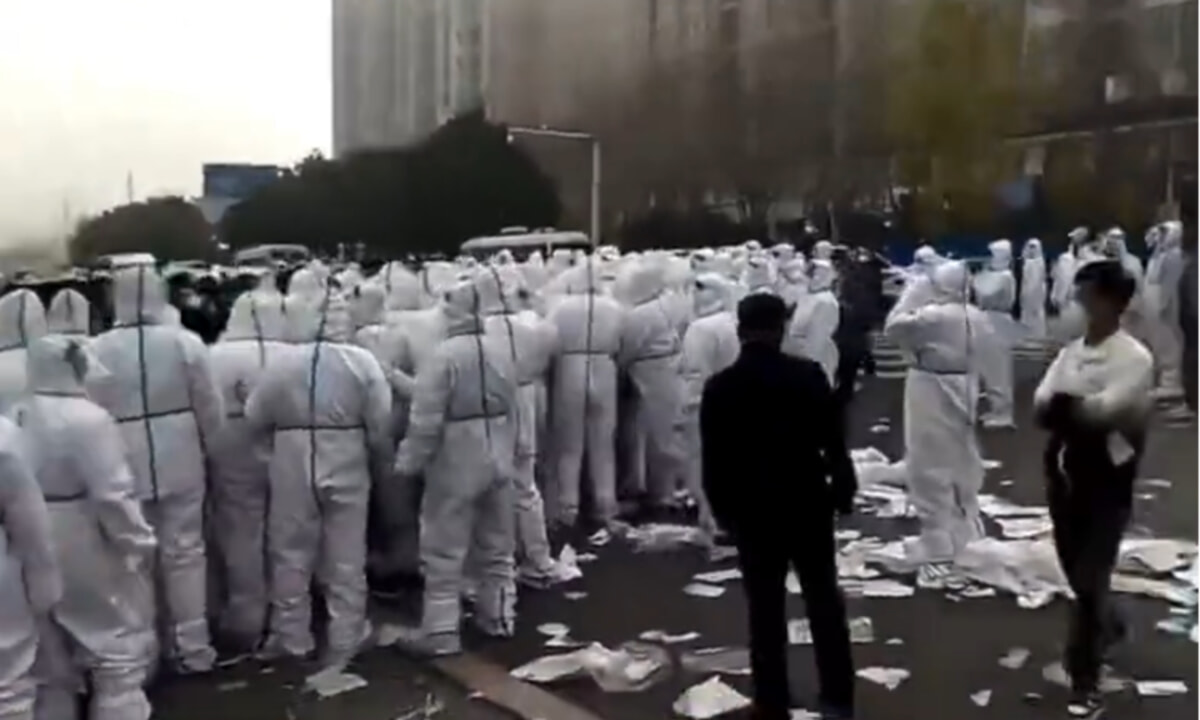 Shouting “defend our rights”, hundreds of workers at the Foxconn plant in Zhengzhou, China, staged heated protests against the Zero Covid policy yesterday November 22nd. The main Chinese plant where half of the world’s iPhones are produced has been the scene of violent clashes between employees and medical security personnel tasked with restoring order.

Several videos circulated on the Chinese social network Kuaishou show the anger of two hundred workers, who attempted to remove barriers placed around the plant to contain Covid-19 infections, protesting against dozens of police officers in biological containment suits.

Why did the riots break out?

Why such a violent remonstrance? At the end of October, Foxconn had already made headlines. The largest plant operated by the Taiwanese electronics giant in China, employing around 300,000 workers, was shut down last month when a Covid-19 outbreak broke out. Fear had mounted among the factory workers, who live in dormitories and eat inside the Foxconn campus. For fear of being stuck inside the factory, on the basis of the draconian Zero Covid policy imposed by the central government, many workers fled – even on foot – to escape the containment measures.

A Foxconn worker shared live footage from the ongoing protest at the Zhengzhou factory. He said workers had marched out from their dorms this morning to demand compensation, now they are facing riot police. pic.twitter.com/6QypLaekA5

However, some employees preferred to stay at the plant, after Foxconn offered a one-time bonus of 500 yuan ($69) and a salary increase of four dollars an hour. The company has also hired 100 new workers to replace those who have fled, to avoid the shutdown of the production of one of the best-selling products during Black Friday and the holiday season. However, the promises of the technological giant have not been kept. The protest seems to have erupted over the non-payment of the promised bonuses and the spread of the infection in the plant.

The umpteenth outcry came after the complaints that emerged on social networks from workers who complained of precarious hygienic conditions in the plant and shortages of food and other basic necessities. However, the technological giant is not about to get overwhelmed by the controversy and rejects the accusations against the sender, stating that it has paid the due contributions to the employees and has enforced the anti-virus regulations in the factory. However, the company seems to want to take measures and has promised a compensation of about $ 1,400 to each new hire to leave the company. A feeble attempt to quell the protests.

The account of yesterday’s riots briefly broke through the strict Chinese censorship, before every video and comment relating to the day of protests ended up in the crosshairs of the censors. Searches for the word “Foxconn” on Chinese social media yield no results. A sign of immediate and aggressive censorship.

This video circulating of the fresh clashes at #Foxconn would appear to show armed officials (presumably police) kicking protesting worker(s) after they go to ground. The #ZeroCovid crisis hitting the world’s largest supplier of #Apple iPhones continues. #China pic.twitter.com/4LnS1Z9mtn

What do the protests tell us?

The rare instances of violence at the plant in the central city of Zhengzhou testify to the build-up of tensions since the inception of the Zero Covid strategy, which has sparked protests that had been unheard of in the early stages of the pandemic. Since May, the number of grievances has increased: the first were reported in Shanghai after a strict lockdown; last week, however, there were also violent clashes in Guangzhou. Discontent is also registered in Beijing, where millions of people residing in various districts have returned to lockdown after the first deaths from Covid-related causes recorded in China in over six months.

The anger does not seem to subside, despite the Beijing government’s timid attempts to revise the Zero Covid strategy. A first revision of the strategy came with the Politburo meeting of the Communist Party of China last November 11, when the seven most powerful men in the country decided to loosen the grip of the draconian anti-virus measure to balance epidemic control and the stability of supply chains. supplying.

The central government has therefore instructed local authorities to adopt more targeted restrictions and to refrain from the indiscriminate application of antivirus policies, such as generalized lockdowns, home isolation for contacts of a positive, mass testing and quarantine for those entering China.

How long will the Zero Covid strategy last

China is the only major country in the world still attempting to eradicate Covid infections three years into the pandemic, with the ruling Communist Party saying it is the only way to protect Chinese lives. But even as Beijing promises to maintain a zero-tolerance approach, officials have begun to acknowledge the economic and social repercussions that Zero Covid is having on the territories they rule.

A step towards a total relaxation of the Zero Covid strategy still seems far away. Beijing fears that an abandonment of the anti-virus policy could increase the number of deaths, which officially have not exceeded the threshold of 5,200 deaths. But there is also the immunity gap among citizens that is pushing Chinese officials not to loosen their grip on antivirus policy, to avoid a collapse of the national health system. Although almost 90% of Chinese citizens are fully immunized, the over 60s represent the hard core of those who do not get vaccinated: only 40% of the over 80s have taken the three doses required against the Omicron variant, the most widespread in the country. This is why the calls from WHO and IMF are not surprising, who have urged China to review its Zero Covid strategy and increase vaccination rates.

After the umpteenth complaint of citizens fed up with three years of restrictions, one wonders if Beijing will listen to the indications of experts and analysts who suggest China to live with the virus, rather than destroy even the smallest outbreak. However, listening to external requests would mean questioning the Zero Covid strategy. Since the Zero Covid policy is inextricably linked with the Chinese president, its success is Xi’s success. Its failure, however, is not conceivable.