How the Meloni government will behave with China

Atlantism, pro-Putinism, anti-EU and against China. Within the center-right coalition – Italy’s leading favorite after the September 25 vote – there are several divisions over foreign policy. However, there is one point on which FdI, Lega and Fi are united: the assertiveness towards China and the criticism of the MoU, the Memorandum of Understanding signed by the Conte 1 government in 2019 which brought Italy (the only country in the G7) to join the New Silk Road.

The ‘Chinavirus’ dear to conservatives

The coalition favored in the elections has always shown skepticism towards China, sharpened in the aftermath of the outbreak of the pandemic. First the economic crisis, then the thesis on the creation of the Coronavirus in the laboratory and, finally, the increase in immigration in Italy: the center-right has used all the cards in his deck to foment hatred against the Chinese community in Italy, embracing the tough policy promoted in the US by Trump (who spoke of ‘Chinavirus’ when the pandemic broke out).

“I don’t care, they brought us the virus” Giorgia Meloni declared to ‘Non è l’Arena’ in March 2020, denying the role of China as a “point of reference” for Italy in the fight against Covid in the midst of a pandemic emergency. Meloni, speaking with Giletti, then pressed on the role of the “Chinese communist regime that does not respect human and workers’ rights”, thus defending Western values ​​threatened by communism and, at the same time, re-proposing one of the themes that unite the conservatives of Worldwide.

The recent embrace of Atlanticism

With the government of Mario Draghi, the Atlanticist posture of our country had no longer been questioned, but with the center-right in power, divided between sympathies for Putin and criticism of European institutions, there is the risk of a cooling of relations in Rome. with Brussels and Washington.

Faced with the statements of favor of the coalition colleagues towards the head of the Kremlin, Meloni wore the jacket of the reaser. On several occasions, as happened at the Ambrosetti Forum in Cernobbio, the leader of FdI reiterated the need for Italy to continue to support the European sanctions against Russia and to remain attached to the European Union and the West, against governments “Autocrats” of Vladimir Putin’s Russia and Xi Jinping’s China.

That of Meloni on Russia is a recent turnaround, undoubtedly finalized – as underlined in a Economist article entitled “How afraid should Europe be of Giorgia Meloni?”- to protect Italy from economic failure and geopolitical isolation. Until a few years ago, Meloni often criticized the foreign policy decisions of the United States and the European Union and in 2014 he professed himself in favor of the referendum in Crimea, the result of which was not recognized by the international community.

Meloni, who is convinced of obtaining the keys to Palazzo Chigi, reassures her support for Ukraine and confirms the condemnation of Russia, also sending a message to her coalition colleagues, Silvio Berlusconi and Matteo Salvini.

The leader of Forza Italia, the party that throughout the electoral campaign has placed itself as a guarantor in the center-right of Italy’s Atlanticism and Europeanism, three days after the vote defended his old friend Putin using tones much closer to Moscow than in Kiev. The same register, which however has never changed, is the one adopted by the leader of the League, who has explicit sympathies for the head of the Kremlin. The issue of relations with Russia and Ukraine has become one of the main issues in the summer election campaign. However, party leaders on the right or left have left little room for China in the debate ahead of the September 25 vote.

The positions of the center-right on China

September 25 is a date circled in red on the Brussels calendars. The European institutions are watching the Italian vote carefully, and the president of the EU Commission, Ursula von der Leyen, does not hide the fears of recognizing in the future executive of Rome a model similar to the Hungarian or Polish one.

The European capitals are also observing the outcome of the Italian vote. A far-right force in command of one of the EU’s founding countries raises concerns about probable earthquakes inside and outside the bloc of 27. Several EU countries have increased their distance from China, supporting Taiwan and abandoning the Chinese format 14 + 1. But how will the center-right government deal with China?

Looking at the past of the leaders of Fi, Lega and FdI helps to unravel the knots on the future foreign policy towards China of the government led by the center-right coalition. If Berlusconi has always shown a certain consistency in relations with Beijing, the same cannot be said for Salvini.

In 2019, the leader of the League was deputy premier when the MoU for Italy’s entry into the Silk Road was signed. However, when the yellow-green government fell, the Northern League made a U-turn, standing up as a defender of human rights violated in Hong Kong, Xinjiang and Tibet, showing his support to the Hong Kong demonstrators in front of the Chinese embassy in Rome. . Then another change, when he had himself photographed in September 2021 with Li Junhua, the former Chinese ambassador to the capital.

🔴Today in front of the Chinese embassy in Rome: FREEDOM FOR HONG KONG, solidarity with the citizens hard hit by the ferocity of the communist regime.
The silence of the Italian government on violence and lies? I hope it is not paid.#HongKong #HongKongProtests #StandWithHongKong pic.twitter.com/kfKIuG5NNZ

Meloni has a clear position on the Chinese authoritarian system, in an area very close to Trump’s anti-Chinese posture. When he was minister of youth in the Berlusconi government in 2008, the then member of the National Alliance criticized China’s policy towards Tibet and stressed the need to mobilize in favor of Tibetans. For this she was also criticized by the then Prime Minister Berlusconi and the Foreign Minister Franco Frattini.

But only recently, in view of the elections on 25 September, the leader of FdI has strengthened her anti-Chinese policy. The first signal came on July 26, when Meloni met for the first time the representative of the Taipei office in Italy Andrea Sing-Ying Lee: the meeting was immortalized by a shot shared on Twitter, where Lee is defined “Ambassador”, despite not being the title formally recognized by the Farnesina. They won’t have taken it well in Beijing. 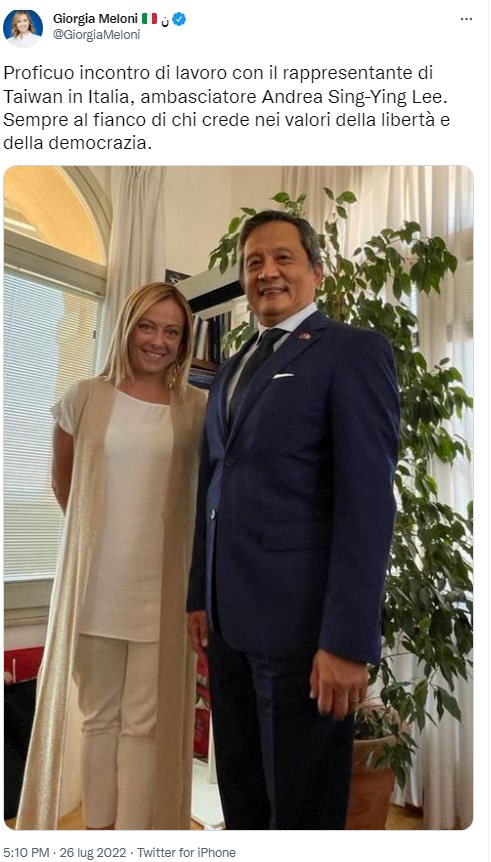 Undoubtedly, the Asian giant, which claims the island of Taiwan as part of its national territory, did not take the interview given by Meloni to the Taiwan’s main news agency, CNAless than 48 hours from the vote.

This is an important field choice for the far-right party that is strongly anti-Chinese. “With a center-right government, it is certain that Taiwan will be an essential concern for Italy,” Meloni told CNA, stating that he “followed closely and uneasily” what is happening in the Strait. And then the warning (or criticism) addressed to Brussels that, according to the FdI leader, it should “deploy all political and diplomatic weapons at its disposal”, exerting “as much pressure as possible” to prevent China from provoking any military conflict in ‘area.

Meloni has no doubts: Chinese military action would also have repercussions on trade relations between Beijing and Brussels. “Let’s not forget that the European Union is also a key outlet market for China, which risks being closed if it decides to attack the island”, underlining how much Taiwan is a strategic trading partner for Italy and the European Union. . 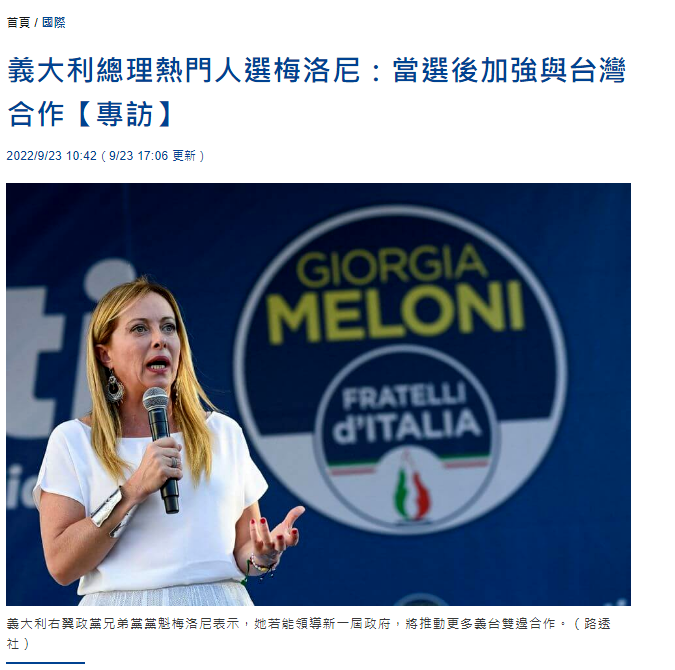 Do not miss the thrust of the Conte government and the choice to join the New Silk Road. For Meloni, joining in 2019 was “a big mistake” and “it is difficult” to predict the political conditions for a renewal of the memorandum of understanding between Rome and Beijing in 2024, also in consideration of the treatment reserved for activists from Hong Kong and the ethnic minorities of Xinjiang.

In the interview, Meloni said he paid particular attention to the re-election of Taiwan’s Democratic President Tsai Ing-wen. “Although our political ideas are different, Taiwan and Italy will be able to have a fruitful collaboration”, said the leader of FdI. During the interview, Meloni did not elaborate on the issues on which she differs from President Tsai, such as marriages between people of the same sex. Taiwan is in fact the only place in Asia where two homosexual people can get married, while Meloni has clearly opposed positions on marriage between people of the LGBTQ + community. After September 25, in case of victory, the ‘Sister of Italy’ must prepare for a tough fight, with China on the other side of the ring.

The North Face, the must-have jackets in the boys’ wardrobe