On the day Vladimir Putin ordered the mobilization of 300,000 reservists to be sent to fight in Ukraine, protest in Russia against the war is growing. According to the NGO Ovd-info, over a thousand (at least 1,335) people have been arrested so far for taking to the streets in various cities of the country. The largest number of arrests were in St. Petersburg and Moscow. Dozens of people were however also stop in Irkutsk and Ekaterinburg. Tickets for flights departing from Russia soon sold out following the announcement of the Russian leader, who has ordered a partial mobilization, which means that some 300,000 military reservists – but not conscripts – will be drafted to support Russian forces that have suffered recent devastating battlefield defeats in Ukraine. 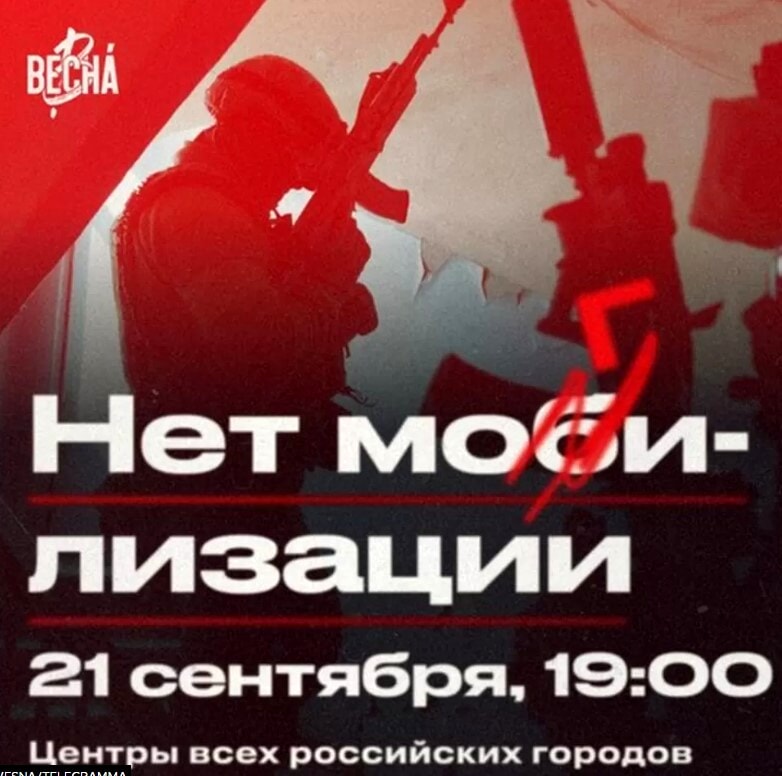 On Telegram, the Vesna opposition group invites the Russian population to demonstrate against the war

The Kremlin’s move came the day after the occupied areas of Ukraine announced swift referendums on joining Russia. Putin stressed that he will use “all available means” to “protect Russian territory”, which theoretically also implies nuclear weapons. Who can flee. Flights to popular destinations such as Istanbul in Turkey and Yerevan in Armenia have been selling like hot cakes. The price for flights from Moscow to Istanbul or Dubai reached 9,200 euros (9,119 dollars). One way. Finland has open borders for now. Someone is trying to reach Belarus by car.

The Moscow prosecutor’s office yesterday warned that invitations on the web to participate in unauthorized street protests, or participation in them, could lead to up to 15 years in prison. The participants pthey could be prosecuted under laws against the discrediting of the armed forces, the spread of “fake news” about the Russian military operation in Ukraine or the encouragement of minors to protest. In recent months, internal repression imposed by Russia against those accused of spreading “disinformation” about the war in Ukraine and police operations against anti-Putin activists have made public protests against the war rare.

But the anti-war Vesna opposition group continues to call for widespread protests. And the fact that the demonstrations are now also outside Moscow and St. Petersburg, the country’s two main cities, is emblematic. A video from Yekaterinburg shows police violently dragging protesters onto a bus. Pavel Chikov, a lawyer with the Russian human rights group Agora, said the association had received 6,000 requests to its hotline since Tuesday morning from Russians who wanted information on soldiers’ rights.

As in February, the demonstrators lack a reference leader, a figure who catalyzes the feeling of rejection of Putinian policies. Aleksey Navalny, the opponent who is now serving a nine-year sentence in a penal colony, yesterday circulated a message: “Putin wants to stain hundreds of thousands of people with blood. The extent of this crime and the number of people involved is on the rise, and this is done solely to ensure that a person preserves his or her personal power, “he said.

Who is sent to the front

Over the past few months, total control over the state media has meant that many Russians have more or less embraced the line that Ukraine’s “neo-Nazi” government and NATO threaten Russia. The extent of Russian opposition to Putin’s line on Ukraine is difficult to gauge, precisely because the restrictions on the media are rigid.

In Russia, the pro-Putin regional governors, who must now organize the mobilization, have expressed their support. “We will not be weakened, divided or exterminated,” said Ulyanovsk governor Alexei Russkikh. “Our region, like all the others in our country, has a duty to mobilize citizens for military service”. Chelyabinsk governor Alexei Teksler said mobilization is necessary to ensure Russia’s “sovereignty, security and territorial integrity”.

Many young Russians told the BBC the fear of being sent to the front. M.atvey, from St. Petersburg, says: “I was hoping it would never happen.” “Now it is obvious that Putin will not step back and continue his stupid battle to the last Russian citizen.” He added: “I shouldn’t be recruited during this mobilization phase, but there are no guarantees that things won’t get worse.” Evgeny, 31 who lives in the UK, says, always at the BBC: “Absolutely everyone is afraid, everyone sends different information about the mobilization. It is very difficult to understand what is true and what is not. Nobody trusts the government.”

Who will be called to arms

Specialized reservists with combat experience will be called up. A clarification that may not convince, given the more vague wording of the relative decree signed in the evening, which focuses on the economic framework (and sanctions) for newcomers, leaving the governors of the regions the opportunity to go beyond the “audience” of the 300,000 men estimated by the Defense Minister, Sergej Shoigu. In fact, the Ministry of Defense of the Russian Federation will decide who, from where and in what numbers to send to war. Already in these hours, many Russians are receiving the notice of mobilization. If the mobilization had been general, and not just partial, all men between 18 and 50 years of age would have been called. If you receive the card and do not go to the enlistment office, you are under criminal responsibility.

Cornered by military disasters in a war that was expected to close in a matter of weeks, at most months, Vladimir Putin has now chosen the path of escalation, despite growing pressures from that part of the world – India, China, Turkey – which he considered an economic ally. The outlook is unpredictable. There is an autocrat whose future (it is not clear only if near or far) is marked, who has slipped into a disastrous war and who can count on the largest nuclear arsenal in the world: 6 thousand warheads or a little less.

“We did not provoke this war. We had no choice but to defend ourselves. Ukraine wants peace, Europe wants peace. The world wants peace. There is only one who wants war.” The president of Ukraine, Volodymyr Zelensky, expressed himself in this way in the intervention in video link with the UN General Assembly. Zelensky calls for “punishment for the aggressors, until the aggression has no end. Sanctions are part of the formula for achieving peace” and urges the establishment of a “special court” to judge the crimes committed by Russia in the war triggered by the invasion ordered by Vladimir Putin in February.

“Ukraine has shown strength on the battlefield, no one can blame us for weakness or inability to fight for our independence, the result will be the guarantee of a stable peace”, stresses the Ukrainian president. “It was not us who caused this war – he reiterates – there have been 88 talks to avoid war, but instead of stopping this crime of aggression, Russia has turned it into a full-scale invasion”. 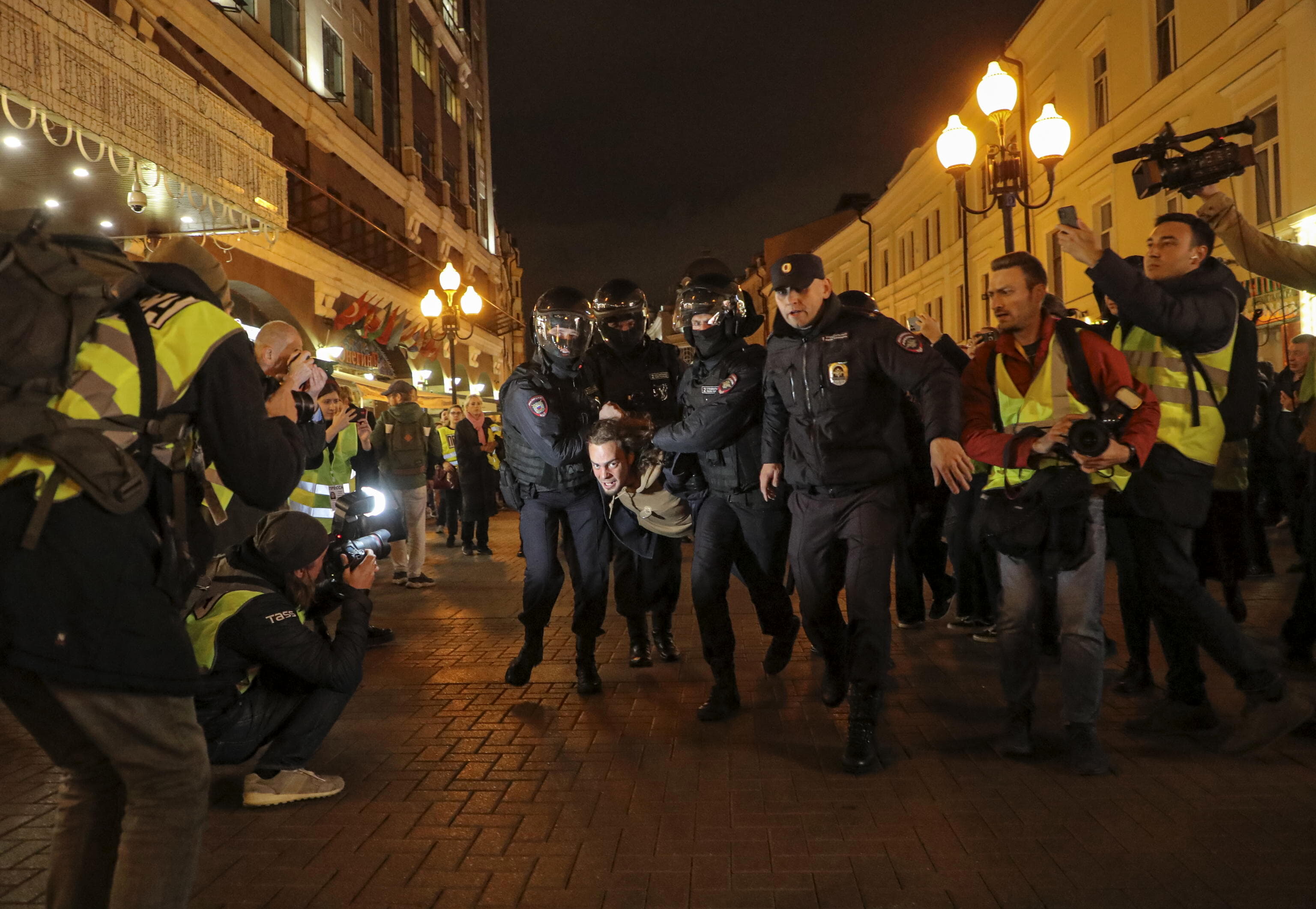 Protests in Moscow against the war. A young EPA / MAXIM SHIPENKOV stopped

All the news today