Meloni on the cover of the German weekly: “Blond poison, she is the most dangerous woman in Europe”

“The most dangerous woman in Europe”. So, in no uncertain terms, you read the cover of the new issue of the German weekly Stern, dedicated to Giorgia Meloni. In the subtitle of the first page it is written: “The post-fascist Giorgia Meloni can win the elections in Italy with the help of Putin’s friends. This would have extreme consequences for us”. The reportage on Giorgia Meloni on page 22 of the progressive weekly, out on Friday 23 September at the newsstands, opens with a smiling photo of the leader of the Brothers of Italy, with another very critical title: “Poison blond – It presents itself as Christian, modern and harmless. At the same time Giorgia Meloni wants to transform Italy into an authoritarian state, if she wins the elections “.

The article, written by Luisa Brandl and Andrea Ritter, talks about a leader who tackles social issues and presents herself effectively on the stages in Italy, gathering wide support, but Meloni has lately omitted its characteristic themes such as the “maritime blockade against the refugees “,” the Europe of homelands that it wants to promote with its great model of reference Orbán “and” the tirades against the LGBT lobby “. The article adds that “Meloni says she is a Christian, but that doesn’t necessarily mean she likes going to church. She supports ultra-conservative groups that, in the name of God, are mobilizing against the right to abortion and families. natural ‘”.

On Russia, the weekly still writes Stern, “both Berlusconi and Salvini maintain links with the Kremlin. Through them, Putin would for the first time have allies in the government of a Western European country and with their help could destabilize the Union.” Stern also writes that “in 2020 Meloni spread false news about the coronavirus and tweeted that the EU would benefit from the pandemic, without explaining exactly how”. In terms of foreign policy, again according to the article, “much suggests that Meloni will have a pragmatic approach at the European level, to ensure that Brussels continues to send money to Rome”, but the problems for the EU and the euro would be lurking and “the fear for Italy ‘special child’ is back”, also because of the plans of Matteo Salvini.

In the reportage by Stern also the Brothers of Italy deputy Fabio Rampelli speaks, explaining: “I knew that if we had brought this woman (Meloni) forward, it would have been clear that the Italian right no longer has anything to do with the fascism of the 1920s”. Rampelli, among other things, also defends Meloni with respect to the video in which, as a young man, she spoke of Mussolini, saying that “it is a media campaign. Nobody knows the context of those words”. 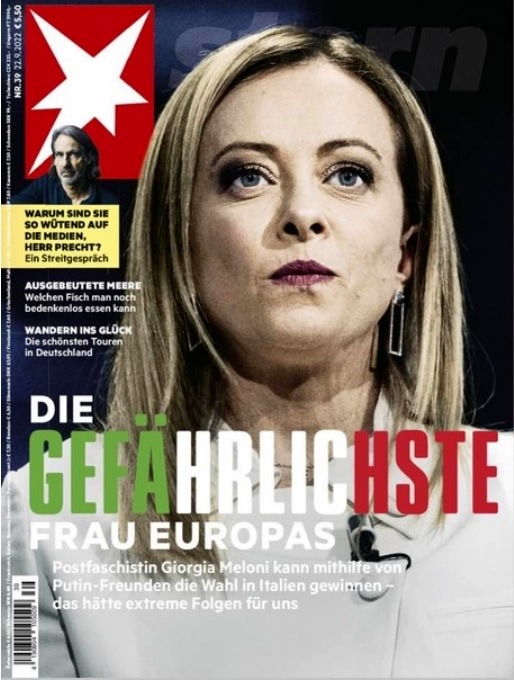 Francesca Cipriani, wedding in sight. Here are the invited gieffini

Francesca Cipriani, wedding in sight. Here are the invited gieffini