Arisa against Giorgia Meloni on abortion: “It makes me laugh”

Abortion? Arisa has clear ideas on the subject and they do not coincide with those of Giorgia Meloni. The singer and professor of Amici, in fact, has never hidden her political thoughts and already a few weeks ago had had her say on the gay family issue declaring herself against the ideas of the leader of Fratello D’Italia who thinks that children need a mother and father and not a parent 1 and a parent 2.

Today Arisa returns to express her thoughts but she does so regarding abortion and, once again, openly attacks Meloni declaring, in her Instagram stories, that the words of the abortion policy only make her laugh.

The former winner of Dancing with the stars and former partner of Vito Coppola with whom she paired in dance but also in life, has published in her Instagram stories a reel of Freeda in which Giorgia Meloni has her say on abortion in Italy and his sentences are promptly denied by the facts.

“Look, Italy does not seem to me that it has happened anywhere that a woman who wanted to terminate a pregnancy has not been able to do so – declares Meloni in the video – After which the right to abortion in Italy has always been guaranteed, oh well they had of the difficulties. Forgive me but there is also people’s conscience, it’s not that we can force people to do things they don’t feel like doing “.

The video in question seems to have entertained Arisa a lot who, not wanting to leave room for doubts about her political thinking, accompanied the video with a very clear comment. If in his previous stories he had written, referring to another video, “It makes me laugh too much”, when it came to Meloni, in large letters, Arisa wrote “This too”. 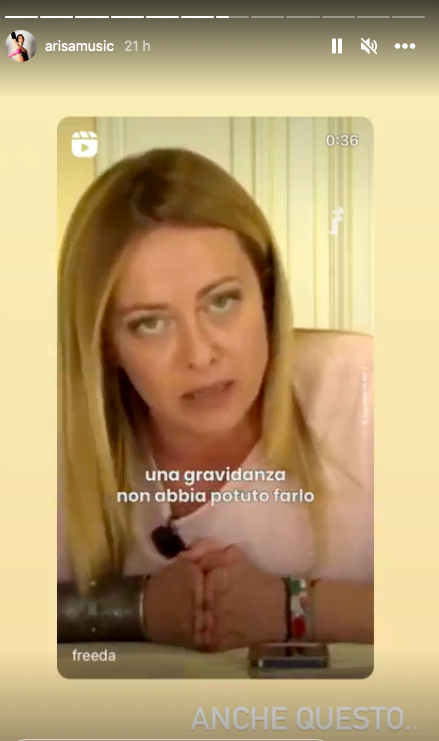 Protests in Iran out of control: there are deaths and the government wants to shut down the internet

Protests in Iran out of control: there are deaths and the government wants to shut down the internet